As we drive into Zomba, the driver, a soft-spoken man named Jones, cautiously swerves the car around frequent potholes along the narrow highway. Being a Saturday, the roadside is abundant with unhurried men and women walking back from church or the market, children either lagging behind or springing ahead of their parents on the red dirt. The “flying pigeon” bicycles that were common a quarter century ago are even more abundant now; the cyclists, predominantly men, carry an assortment of payloads that defy common sense and physics. Stacks of wood, huge bags of charcoal, Carlsberg crates, towers of plastic containers, bouquets of baskets, various bits of metal, the occasional large piece of furniture strapped down with a zigzag of rubber straps, and every so often a log big enough to carve a decent boat if one were so inclined and capable of doing so. 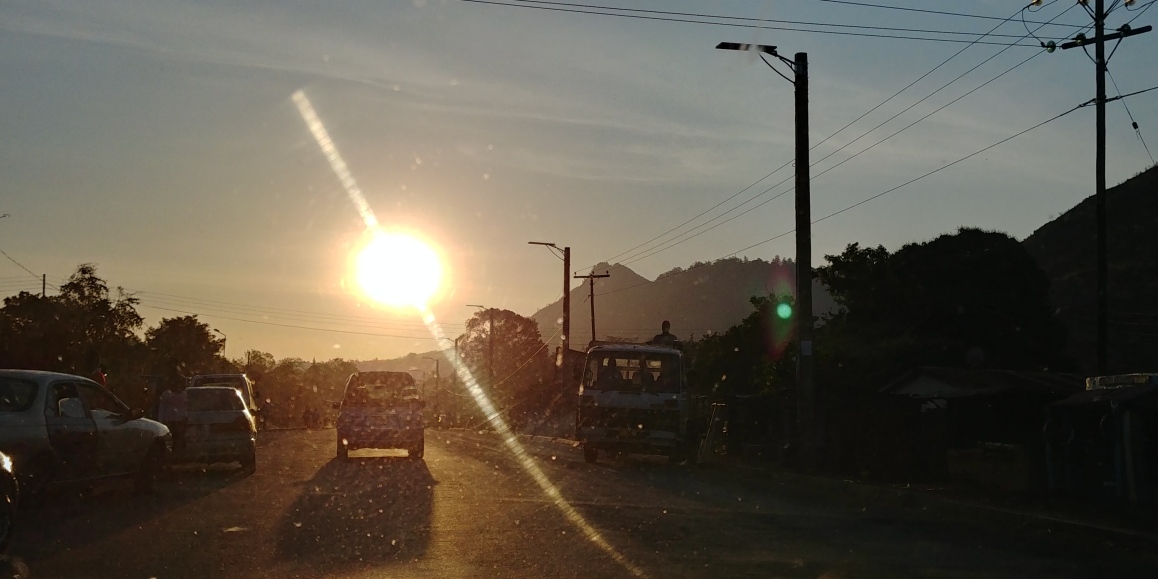 The Zomba plateau, once so resplendent with dense foliage, has been carved to dust over the decades, a still-beautiful but baked brown sight swelling on the right side of the road. As we approach the last market before town, I see a storefront for the Final Destination Funeral Home and I smile.

Within me, I am trying to keep my emotions in check, and I manage only because I keep quiet and share nothing with Jones, a stranger I met six hours prior and have spent every minute with since. Had I been with someone close, I probably would have told them of the profound significance Malawi has had on me. As an unemployed graduate back in 1993, I was given an opportunity by a volunteer organization to come here and be a math teacher for two years. I had no experience teaching, I had no experience living or working overseas, and I had no idea what to expect. Teaching in Malawi was ultimately a transformative experience. And however much friends and family lauded my decision to move to a strange country for two years and help others in need, the reality was more prosaic: I did this for myself. The most relevant cliché would be: “I wanted to find out who I was.”

I did, at least as much as one can at a young age. Students’ interest in learning, the friendships I forged with other volunteers, the strong relationships I made with teachers, and the constant acts of kindness from strangers were powerful affirmations of the importance of engaging with others with compassion. To put it simply, my interactions with others here in Malawi enabled me to be a better person. And in much of my work since my teaching days, I have tried to emulate that compassion.

Prior to coming back to Zomba, my wife told me that I was “coming full circle.” After 25 years of travelling to dozens of countries to engage with people who tirelessly work to improve the lives of others, I am now finding myself reflecting on what I want to do next, and the option to stay put and focus on issues back home has indeed consumed a lot of my thinking. So perhaps I will hang up my travel hat, in which case this trip to Malawi does complete a long and fulfilling circle.

As we drive through the outskirts of the city, I ask Jones if we can continue driving a bit more and visit the school where I taught. I’d planned to visit it only the following day, but somehow the impulse, the immediacy, cannot not be contained.

“Of course,” Jones says. And so we drive. A sense of trepidation creeps up as I see one unfamiliar building after another. Then again, I was seeing shops selling mobile phones, an absent technology during my earlier stay.

We turn left at the main junction to pass through town, and while the unmovable staples of any small city – the bus depot and the market – remain largely unchanged, I see most shops as though I’m a visitor coming for the first time. The density of shops selling electronics, mobile phones, and SIM cards has taken over many tailoring shops and fabric stores. Newer buildings double the height of anything I’d seen before; a full two stories. The Chibuku bar, selling the local brew that can best be described as grainy, effervescent sludge that will make you hurl, is still there, music blaring and patrons happily chugging the slush by passing around a carton among friends and strangers with equal joie de vivre.

We near the area where the Hot Spot Bottle Store used to be, but somehow there is a new road, and then a new building, and then more than one new brick wall. I ask Jones to turn down a road I think looks familiar but brings us to a wiry maze of homes set behind brick wall after wall. Within two minutes I’m lost in a place I called home for two years.

“Let’s ask someone how to get to the school,” I ask Jones.

He spots a man wobbling down the road and asks him. The man willingly obliges and insists on hopping in the car to show us in person. The man is piss-drunk, and all I can think of is the cash I’ll have to fork out cleaning this rental car after he splashes his Chibuku lunch over the back seat.

“I used to live here but I’m lost with all the brick walls,” I tell our drunken friend.

“When were you here?” He manages to say. I tell him.

“Yes I remember you!” He answers, entirely implausibly.

He keeps his Chibuku chunks in as we pass his house and eventually find our way to the front entrance of St. Mary’s school. We drive past more brick walls and come upon the gate. The gatekeeper, seemingly alone in the compound, opens the door and salutes. Jones tells him I was a teacher at the school.

“Why don’t you drive our friend back to his home, then you can come back here,” I tell Jones as I slip him a few kwacha, expecting our guide would ask me for some. As I step out of the vehicle, he does indeed ask me for “something small for some air time.” They drive off, I’m alone. The dormant memories suddenly rage against the intense stillness of the air around me as I feel powerless against an involuntary reflex to weep. I try instead to focus on the changes in the school’s appearance. The antiquated pay phone has since been removed from the font pillar, but the assembly hall to the left hasn’t changed. The door to the staffroom is open, but with no power and an imminent sunset, I can’t see much other than the addition of steel bars on the windows and door. The Virgin Mary in the courtyard has a fresh coat of paint but is still missing her right hand. The colours of the walls changed from white to blue; the roof is in jarringly poor condition, but the rest of the school structure looks essentially unchanged, although understandably weathered. A voice from behind me gets my attention.

With hand outstretched, she introduces herself as one of the Sisters from the convent. When she hears my story, she goes to find the school bursar, who would be able to escort me around. As she walks away my eyes wander to the classrooms on either side of the library. Then, down to the left, the battered door to classroom 3A. My first class. The door is the same, the chalkboard new, but the chairs and desks stunningly appear in the same condition as in 1995: sturdy and uncomfortable, crooked and uneven, scarred and pitted.

You can go home again. I stand in silence.

A new voice from the courtyard brings me back as I dry my cheeks and leave the classroom. Sister Stella, the school bursar, warmly welcomes me and gives me a tour of the staffroom, all the while informing me of the whereabouts of the teachers I called friends more than twenty years ago. We chat for a long time, walk about the school compound, and I even get the opportunity to visit my old house and talk with the current owner. By the time I get back to the car and express my thanks to Sister Stella for her kindness, the school’s deputy head comes running up to me and shakes my hand.

“We’re so glad you are here, sir!” He tells me. “I’ve heard so much about you!” It’s impossible for anyone to hear much about an unexpected visitor who’s only been around for a few minutes, but his enthusiasm is genuine. We say our goodbyes.

The next morning, walking about town, I see my drunk guide, now sober. We greet each other like good friends.