I’m driving my younger son home and I ask him how his day went. He hesitates for a moment and tells me, “Why do they keep inventing more bad words, Daddy?”
Crap I know where this is going. 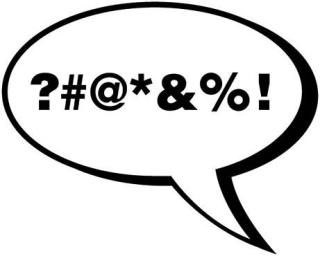 “You know,” he says, “the people who make up bad words. They keep coming up with new ones I’ve never heard of before.”

“So you heard a new one today at school?” He nods and says yes. Two kids were calling each other a name during recess and laughing about it. I know he doesn’t like saying bad words out loud, so I ask him to spell it out for me. He misspells it.

“That’s the name of a country in Africa,” I tell him. “But I know the word you’re talking about. It’s an old word that we shouldn’t be using anymore. It was used long ago to make people feel inferior and it was really bad.” I told him a little about the book on slavery I’d finished reading the week before.

“So it didn’t exist when you were young?” he asks me.

I told him it did. It’s the kind of discussion that catches me off-guard as a parent but I know I have to face these kinds of conversations whether I want to or not. As much as I want to protect my children from a world around them that is insulting, uncaring, rude, arrogant, stupid, shameful, discriminatory, racist, and sexist, there will be more and more times when I’m not around to shield them from any of it. My mother’s approach was one of avoidance: we never talked about kids swearing, doing drugs, drinking or having sex. None of that existed once I entered my home. She didn’t want to talk about it and neither did I. So when I have my son come up to me and tell me a swear word that’s new to him, I can’t fall back on my own experience to guide me on a proper response.

But despite this I’m glad he’s comfortable enough to talk to me about it, and however uncomfortable it is for me to answer him, I have to respond. As my children mature and learn more about the world around them, I realize they’re exposed to a lot more crap than I want them to be, but at the same time I need to realize that they are capable of making decisions about what to say or not say, how to be kind and respectful rather than mean-spirited, and how to speak up for what’s right. And talking to them about the stuff that was taboo when I was a kid is one way I hope will help.

“When the kids during recess were using that word, did you say anything to them?” I ask him.

He tells me no. “Maybe next time you hear that word you can tell them it’s not nice to say it. Like, ever.” He nods. I know he’s a good kid.

I drive down our street and pull into the driveway.

“There was another word I heard today, Daddy.”

_______________________________________________
November 20 is Universal Children’s Day. This year UNICEF is focusing on putting hidden violence and abuse of children in the spotlight. Let’s talk about it end violence against children in all its forms.
Imagine a simple drawing showing a group of men, women and children who appear to be of Palestinian origin, frantically fleeing a series of armoured tanks and soldiers brandishing guns and dressed in green uniforms. The faces of the soldiers are too small to make out clearly but, if you look closely enough, you will see what appears to be the Star of David on one of the tanks.
Now imagine that drawing as part of a lesson plan for secondary school students on the right to humanitarian treatment.  If you assumed this was a lesson plan for Palestine refugees, you’d be right.
When I saw this image in a lesson plan a few months ago I said to a friend, “Why is this in here? What possible good does it serve to show Palestinian civilians attacked by Israeli soldiers?” He didn’t have an answer. On the plus side, it didn’t appear as though any teachers regularly used the lesson.
Bias in textbooks is nothing new. As a recent Economist article pointed out, some Israeli textbooks represent Palestinians as refugees, farmers, and terrorists. Books written by the Palestinian Authority “since the 1990s often shy away from awkward questions. The authors cannot decide whether to portray Palestine as they understand it historically, Palestine as they hope it may emerge from a settlement with Israel, or the messy reality on the ground that changes from year to year.”
Forget from year to year. Things were relatively calm when I entered Gaza a couple of Fridays ago, and within 48 hours there were rocket and mortar attacks at the border when I crossed back into Israel. Since then the assaults have become deadlier by the day with, hopefully, a lasting ceasefire that has just taken effect.
Regardless of the ever-changing situation in Gaza, what children learn about related to human rights should reflect a positive outlook. Even though a curriculum showing that “you’re oppressed and things aren’t getting any better” may be accurate, I doubt it’s in the best interests of children. This doesn’t mean that difficult issues around the rights of Palestine refugees should never be addressed in schools. They must, if children are to become active participants in creating a culture of human rights. In order for that to happen, though, teachers must have the proper skills to engage students into critically reflecting on their lives using a language based on human rights.
Sounds straightforward. I want to convince teachers to have a positive outlook, but honestly my own convictions are tested in situations where senseless violence and fear become the norm. As the bombs finally stop falling in Gaza and Israel I wonder why I’m doing the work I do in human rights. My last trip was only for two days. I was there to pilot a toolkit on human rights I’ve been developing for UNRWA, the United Nations Relief and Works Agency. The goal of the pilot was to get feedback from primary school teachers on the structure, content, and usability of the toolkit. Following the two-day workshop, the teachers were expected to try out parts of the toolkit in their classrooms with their students. One school was scheduled to try three of the toolkit’s activities, another two schools planned on doing four activities each, and a fourth school wanted to try out five activities. The activities focus on the understanding of different human rights themes: learning about human rights in general, strengthening respect for each other, learning to solve conflicts peacefully, appreciating diversity, and –
Oh forget it.
The schools are closed. No wait that’s not true. They’re open but filled with families who fled their homes seeking refuge from the aerial strikes. The teachers I gave the workshop to won’t be teaching, they’ll be hunkered down in classrooms protecting their families or held hostage at home doing the same. Their routine of teaching children hope in a hopeless land just got a lot worse. The reality of their lives, already frighteningly tenuous, makes the stuff I showed them seem preposterously naïve.

A Grade 4 student from an UNRWA school– a young girl my son’s age – was killed by an Israeli air strike November 18; an UNRWA teacher at a boys’ school was killed in an attack last week. I think of their deaths and wonder of the futility of teaching about human rights in a place like Gaza. The young girl, had she survived, could have eventually participated in one of the toolkit activities where she and her classmates create a community map using paper and coloured pencils. They would draw different places in the community where rights are present – the mosque (the right to practice your religion, Article 18 of the Universal Declaration of Human Rights), their homes (the right to housing, Article 25), the beach (the right to rest, Article 24), the health clinic (the right to health, Article 25). The activity is called “Rights all around me” and is meant to show that, however dire your living conditions, there is still some scrap of dignity amidst your depressing surroundings that proves you are a human being and you deserve to be treated as such.

Now any map would be filled with bombed-out craters, black holes where homes, mosques and pathetic health clinics used to stand. I want teachers to present a positive outlook for their students but the damn bombs, the killings, the destruction always get in the way. As if that weren’t bad enough, an apparent “Israeli spy” was just killed and dragged through the streets of Gaza City by motorcycle as children looked on. I can’t help but think What the hell are you doing?
John Lennon’s Imaginepops in and out of my head a lot these days.
You may say I’m a dreamer, but I’m not the only one. I hope someday you’ll join us, and the world will be as one.
This isn’t the time for futility, I tell myself. Teachers want to learn about human rights because they know things have to change, if not for themselves then for their children. The bombs will stop, the dust will clear, the victims mourned, and somehow the children will learn a language of peace.
Malala Yousufzai, a fourteen year old girl advocating for girls’ right to education in Pakistan, is still fighting to save her life. She was brutally shot by the Taliban October 9 while in her school bus. The Taliban has shamelessly reiterated its vow to kill her.

A day later, Amanda Todd, a young Canadian girl slightly older than Malala, killed herself after relentless bullying. The video she made as a call for help a month before her death is chilling and utterly painful to watch.

By the end of the week, I attended a regional Amnesty International Canada meeting, where one of the guest speakers was Marina Nemat, author of Prisoner in Tehran. As she spoke of her time in prison at the age of sixteen – just slightly older than Malala and Amanda – the room fell silent. Her gentle humour and recounting of memories dancing to the Bee Gees inflected at the start of her story were pushed aside by a deft narrative articulating incomprehension, isolation, and heinous violations. The strength drawn from hundreds of fellow prisoners, listening to their stories of previously normal lives as she stood in line with them waiting to use the toilet, reflected the importance of something so key, so elemental to our ability to persevere in the face of adversity. We need to talk, we need to listen, we need to be heard, and we need to be kind to each other. After Mrs. Nemat spoke I could not help but wonder how Amanda Todd’s choices could have been different if someone listened, or if she hadn’t been bullied in the first place. As for Malala, how different would her fate have been if more people had not supported her in her actions?

Amanda and Malala’s stories never should have spiraled to the tragic events that unfolded this past week. The day after Amanda took her life, the world celebrated the first international Day of the Girl. It’s meant to be a movement to “speak out against gender bias and advocate for girls’ rights everywhere.” I’m sure the sad irony of that day following these events is not lost on many who hope for a better, safer future for all girls. The Day of the Girl is needed, from Pakistan to Canada and everywhere else. But a day, of course, is insufficient. I hope there are better days ahead.