If there were space on my mother’s tombstone, I would have wanted to see this epitaph: “Courageous woman who indefatigably raised two children on her own and gave them all the love they ever needed, always made sure they were happy and healthy and got every chance in life available to them. Tenaciously pushed them to continue their education, doggedly encouraged them to do their best in everything, gently told them to pursue their dreams, and forever worried about them every single day.” Had she been asked to put her own epitaph, she might have chosen: “She did the best she could.”
She was doubtful but proud, modest but eager to brag about her sons’ accomplishments. To raise my brother and I alone after our father’s untimely demise took strength of character I can only hope to emulate. Her husband died, I almost died a few months after, both my brother and I were hospitalized, she was diagnosed with cancer and survived nearly a quarter century after that, and above all, she alone raised my brother and I in a loving home. 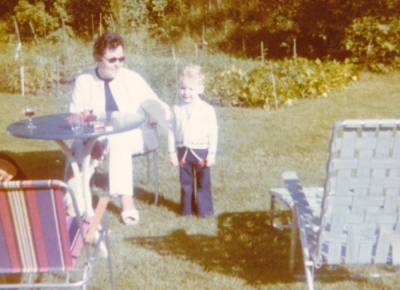 She was unwittingly thrust into a situation following my father’s death where time to mourn was pushed aside by the immediate necessity to take care of her children. For me, to hear the word “mother” evokes powerful feelings of strength and courage, of bravery in the face of adversity, of protection and care, and the unflinching ability to force me to eat lima beans at least once a week.
As she lay dying in the hospital bed four years ago, the nurse who cared for her came to speak with me. My brother and I had been with our mother every day since her diagnosis with brain cancer. At that point it was nearing forty days, my mother no longer recognized us, she could no longer move on her own, and the strength I knew and depended on my entire life was all but gone. The nurse said to me, “There aren’t many children who come and stay with their parents every day like this.” She was right: almost all the patients in the ward were elderly and near death, and the halls were absent from visitors. I looked at the nurse and stated the obvious: “It’s what my mother would do for me.” In my mind, I could sense my mother waving an accusatory finger at me if I did otherwise: “You’d better take care of me, Buster Boy, because I took care of you for all these years.” My mother showed me that care, love and responsibility for family was never a choice; it’s just what you did.
Like most mothers, her life was an ordinary one filled with joys and hardships. However the choices she made and the courage and dignity she embodied were nothing short of extraordinary. I had none of my mother’s extraordinary strength as she died in front of my brother and I. But whatever she taught me kicked in at some point. With every passing Mother’s Day absent of her voice, I grow more content, more fulfilled, more thankful for the extraordinary life an ordinary mother gave me.

My mother often expressed her doubts as a capable parent. Growing up, I may have questioned some of her decisions, notably the habitual presence of lima beans on the dinner plate, but overall I accepted how my mother brought me up because, as she explicitly pointed out several times a year, “If you don’t like the way I run things, Buster Boy, you can walk out the door.” She would not have let that happen, but it never, ever got to that point anyhow.