Marianne Elliott wrote a great piece – Three Cups of Humble Pie – on the fiasco stemming from Greg Mortenson‘s troubles surrounding the facts of his stories and the way in which his Central Asia Institute has been run. In her post she quotes Desiree Adaway from her blog on the basics of effective governance and how a non-profit should be run. I’ve never read Three Cups of Tea. I bought it for my wife years ago and she found it somewhat interesting but, she admitted, there was something unconvincing and artificial about his writing – a review that may prove to be quite prescient.


When I heard the news about all this last week, I was annoyed more than upset. News like this does little to lend credibility to those working for non-governmental organizations or other civil society organizations who are making a difference in peoples’ lives. Granted, as many people pointed out, including Nicolas Kristof, Mr. Mortenson has probably built more schools in Afghanistan and Pakistan that you or I ever will.


Still. If you want to engage the general (and generally wealthier) public on issues such as education for poor children in developing countries, stick to the truth. Don’t make it sound any loftier or noble than it really is, don’t write anything just to appeal to an uninformed public that is craving for a tear-jerker story. Just tell it like it is. If anything, Mr. Mortenson’s account, if indeed it has been exaggerated, is prompting me to share some of my own stories from the field. One of the most moving for me was back in 2007 in Amman when I took part in a workshop I designed for Iraqi human rights defenders. The workshop was facilitated by alumni of Equitas‘ training of trainers program. During the workshop, I kept a blog of the events. For me this entry speaks to the horror that Iraqis were faced with on a daily basis, and the tremendous courage and strength they showed through incredible hardships. Here’s the entry from Tuesday, March 20:

A short entry, I promise. Second meeting tonight at 10, this time with the facilitators, to plan for tomorrow. We talk about human rights education activities, and as usual we’re changing things a little. 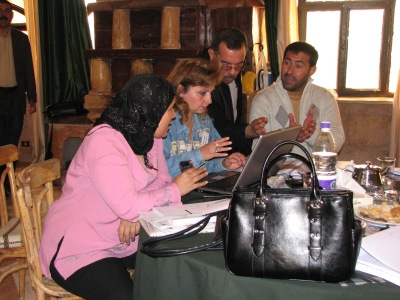 The recap group [of participants] did not do a recap, as we talked about during the debrief the night before. They came up with a way for participants to share their experiences. The setup: take the chairs, come and form two rows in the middle of the room. On the left side, place your chair there and sit if you’ve got a positive story to tell us about your work. Go to the right if you’ve got something negative. People getting organized, shuffling back and forth, not knowing which side was which, still trying to figure out what they were going to say. Settled after a minute or so, silence. Go. The participant facilitating the activity randomly went from the positive to the negative sides, passing the microphone. This is what I typed as they spoke (this is unedited):


Positive. Establishing a student organization in Mosul. After the fall of the regime, we established it despite problems.


Negative. Days are filled with events, all organizations, not only mine. American forces entered Karballa April 5, rising flag American forces attacked us as we raised a flag signaling peace, with reporters. They wanted tv interview, CNN.


Negative. Less than one year of starting work in Mosul, group of young girls preparing to be teachers. Bus taking them to institute attacked by American occupation. Told driver to get down, asked the girls to take off their clothes completely to make sure they were not terrorists. But remained surrounded, bus driver being beaten, shaking bus until local authorities intervened.


Negative: Program to empower youth from different universities in Mosul and Basrah in strategic planning. 365 young people, training lasted 3 months, chosen 10 young men mostly from Baghdad. Leader was a woman, father also dean of the faculty. Received a phone call , girl was assassinated , she and her father. Group couldn’t keep up their work because they couldn’t keep going, I was among them. They were able to learn from her, but it ended.


Positive. In 2005, our location of institute was next to mosque of the great imam. Entered hq, wanted to arrest head of the organization, wanted to bombard the institutions. But neighbours joined us, civilians, we lay down on the ground. President still there at prisons.


Negative. One occasion affected me. Health situations. Being a leader of women league, I’m only female journalist in Basrah. Controlled by religious sects, consider me secular. Received threats. One delivered me at my home. Suffering in fear for my children, one month ago. Another threat from my union, always staying at my parents affected me badly.


Positive. Really happy was the activities conducted with Iraqi organizations, Mosul university. Has plenty of students in Iraq. Program we had coincided with Shiite and Sunni students, lasted for 4 days, drawing and painting gallery, we wanted to disseminate the problems via the paintings in sectarianism.


Negative. Kirkuk. Went to streets plenty of tragedies. First received a threat from American occupation forces, and from militant gangs, they think we are assistants of the Americans. We record speeches, we receive threats – the latest incident bombing yesterday, our furniture was all destroyed, new and hot issue.


Negative. By end of 2003 and beginning 2004. the cadre? Contained a female American, trying to improve skills of organization, assistance to illiterate females. Karballah institute for women, before killing that lady. Even Islamic religion, she started to benefit from Iraqi women’s skills, sharing of information. Inaugurated the centre, faced with terrorists, 5-6 people, attacked us. Killed her by 13 bullets, even her fingers fell down. We left work for almost a week.


Negative. Important incident near bombarding clinics in Babel, terrorist attack , I was near the camera took pictures of the bodies, images even worse in the American movies.


Positive. Target groups, 50 families. Lately, our organizations program for heaters and blankets for families. During the program, people were happy about the blankets. Also felt that …people who are able to donate to the civil society organization.


Negative. Incident very painful. When working in British embassy. Director responsible for Iraqi affairs, last day, very sure said we should leave at 2, not 4. last day, she went with her husband to work in some of the palaces. Her husband, felt something suspicious. Most of us we have weapons, we are licensed. We they got home, they were attacked by terrorists, he died at once, she was pregnant and attacked, hope she will get better.


One participant had to leave the room as others were talking, too much for him. It was over, the participant who facilitated asked me, What do we do? I didn’t know she was going to ask me. What the hell do you answer after something like that? I was down in front of them, trying to figure out what I was going to say as I adjusted my mike. Nothing in my personal experience even comes close to what they have witnessed or been subjected to. But the mere fact that they could find positive things to identify with is remarkable. Shows the spirit, the commitment, the heart that they put into their work. As they were saying their stories, I found I had to make a concerted effort to concentrate on what the translator was saying and to just type it. If I stopped to think about what they were saying, I would have found it difficult to keep my composure.

Late afternoon, another activity that was not easy. Sit in a circle, turn the lights off, close the door. Pitch black. Facilitator asks them to recount a personal incident when they were afraid. I had seen this particular facilitator do this before and it was very powerful; so much so, that I wanted to record what people were saying this time. They sat in the circle, I was by the wall with the glow of my laptop shining on my face. The facilitator began, talking about his own experience, having been detained, people he was with being taken away one by one to have their arms broken. I closed my laptop and listened. One person, the date he won’t forget, August 16, 2006, riding in a bus with 8 passengers and the driver. Stopped at a checkpoint and being asked for ID, people in the bus being shot one by one, him at the back. They got to the guy next to him, whose mobile phone went off, scared the killers, they ran. He and the other passenger driving 40 km to the nearest town, seven bodies in the bus.


I don’t think I can write anything more now.