The second day of the CIVICUS World Assembly is over. Well for me it’s over, and I’m at the train station waiting to go home after a long but enjoyable day. The challenge with writing about a day so full of things to write about is that I find it hard to address everything. So I won’t, and I’ll place an emphasis only on the things that struck me.
Before doing this, a quick jump back to the previous day, when a speaker mentioned something that bugged me. Perhaps bug is not the right verb, but at the very least some of the things she said, or at least the way she said them, were unproductive as a means of moving forward with a constructive dialogue. She peppered her discussion with statistics about the state of the world. Things like: in the past minute, about 20 children have died around the world, or about 25000 children around the world died today. You know the kind: the ones which are mind-numbing to the point where you react upon hearing them in a number of ways: you’re horrified, you’re ashamed to be a human being who hasn’t done enough, you feel uncomfortable because you know the stats and you’re doing what you can, but you still squirm in your chair. I think I fall in the latter category. I guess it’s OK to feel uncomfortable once in a while about these things – after all, it’s the poverty and injustice of the livelihoods we see around us that motivates many of us to fight for human rights. But if it’s meant to shock us into action, then it’s a formula that doesn’t work with me. I don’t think the numbers themselves bother me so much – they are essential to getting our point across –  I think it’s more the way some statistics are presented: someone telling me that a few thousand children have died since I’ve sat down to listen to them doesn’t motivate me through anger or shame, it just depresses the hell out of me. 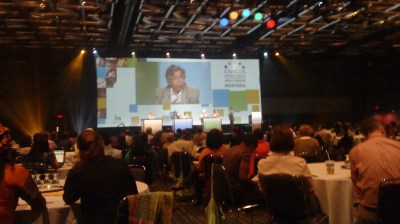 Onto today’s activities, the first of which was a plenary session on economic justice that was ably facilitated by Nuala McGovern of the BBC’s World Have Your Say. The panel had a range of speakers, from the World Bank, FrontLine, Global Call to Action against Poverty, the UN Representative for International Trade Union Confederation (the ITUC is here: http://www.ituc-csi.org/), and iScale. They were asked to share their thoughts on what they believed were the top economic challenges. Regrettably, the focus of the discussion swayed at times too frequently towards the World Bank and other big institutions that implement sweeping policies and practices that don’t take into consideration the voices of the most vulnerable. This was at least the opinion of a number of participants who spoke up and also caused a lively debate between two speakers, one of whom (the World Bank representative) was reluctantly the target of people’s (gentle) ire. It didn’t help that the two speakers exchanging viewpoints at this time were sitting next to each other on a “blue cube,” while the other speakers were left out on their yellow and green cubes (the inspiration of the stage layout is meant to represent CIVICUS’s design for the World Assembly, but it comes off as somewhat impractical).
The moderator regained a balance between exchanges from the floor and the speakers. With so much having been said, there were a few choice nuggets of wisdom from the speakers worth noting:
Following the plenary, participants divided themselves into workshops based on their interests. For me, I found myself attending a workshop on “Making the Case for Dialogue and Deliberation: Tapping into Uncommon Wisdom for Participatory and Inclusive Governance.” From the presentations I took away a renewed sense of importance of evaluating our work – in human rights, that’s a particularly fuzzy thing to do, particularly when you try to attribute long-term social changes to human rights education activities. The examples from the four Canadian presenters were brief and to the point: dialogue between citizens and other stakeholders like government officials works. They pointed out a number of useful websites, one of which is the Canadian Community for Dialogue and Deliberation. And as luck would have it, I sat next to a young woman working on children’s rights in New Brunswick, so I took a moment to tell her of my organization’s work on promoting children’s rights through play with a toolkit called Play It Fair!
Meeting new people – kindred spirits in many senses – is a valuable experience and one of this assembly’s many strengths. Sharing of experiences and, just as importantly, ideas, was the focus of the afternoon session I attended. It was an “open space” activity with the overarching question: What can civil society and its organizations do to contribute to reaching the Millennium Development Goals? Passing the microphone around the group, you got a sense that we were at once both demoralized at the MDGs unfulfilled promises and hopeful that we can still do our part to make a difference. As one small group of participants highlighted, it’s not the time to complain or whine about the MDGs lacklustre results so far (a report is here). The upcoming UN meeting on the MDGs will be an opportunity for us – civil society – to input on what we should be doing to move forward, and it looks like we’re going to come up with some great ideas.
That’s all for now, more tomorrow.

2 thoughts on “CIVICUS Day 2: an update. Among other things, on human rights defenders: "They’re being arrested, so we know they’re doing their job."”