A cold Carlsberg rests next to my computer, a reward I indulge in after a long day. When I lived in Malawi, Carlsberg cautiously labelled itself as “Probably the best beer in the world.”
The day was packed. In our “graffiti wall’ evaluation at the end of the day, some of the participants scribbled, “Long but good” and “Heavy but innovative,” whereas a couple made reference to Paulo Freire’s notion of “unfinishedness” which we referred to at the start of the training. 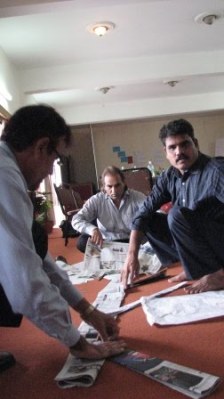 The day started with a simple group-building exercise that reveals how well (or how poorly) we work together in groups. The task was simple: given some newspaper, tape, and a few paper clips, create with others a structure that will be judged on its strength, height, and beauty. (the marshmallow test at www.ted.com is a variation on this.) Everyone had a good laugh trying to keep their structures up, some with success, others….well, not quite.
Before delving into human rights content for specific training sessions (for youth groups, NGOs, human rights club coordinators, and religious leaders), we discussed gender issues facing facilitators. We (atypically) divided participants along gender lines before bringing them back together for a large group discussion. As seems to be the case with many of our discussions, the issues raised become as complex as they are wide-ranging. Questions shifted from gender-sensitive practices in the facilitation environment to sexual harassment and whether or not it’s sometimes perceived as intentional or unintentional harassment. What I thought would take about 15 minutes ended up taking the full hour before the break. And this more than anything shows what I sometimes find my main weakness: if a discussion appears to be meaningful for participants but takes up more time than planned, I typically say to hell with the schedule and let the discussion continue for a while. Adjustments to the schedule are then made later at the end of the day with my colleague. I usually end up cutting stuff which doesn’t present itself as relevant as other topics (I also cheat by leaving an extra 3 hours spread out over several activities at the end of each schedule, but don’t tell anyone this).
Participants did a lot of sit-down thinking on human rights content and matching techniques, and by the afternoon you could tell that the energy level was dropping (we graphed their energy level and sure enough, it was according to them the lowest in the past 5 days). One group of participants kicked up the energy by having us play a crocodile and frog game that got us moving, and then we discussed through a “dinamica” some of our characteristics and perceptions as facilitators. Once again, a certain number of issues elicited lengthy discussions: should facilitators bring their own values to a training (most said yes), whether or not a facilitator should admit their weaknesses to a group (again, yes), and whether or not male and female facilitators face the same challenges (for the most part, no and somewhat).
To round off the afternoon prior to the break, I somewhat successfully divided them along latitudinal coordinates (it was a little harder than expected), and three groups took one minute each to write a facilitator dilemma on a piece of paper. Next step: pass your dilemma to the group on your left and solve the dilemma from the group on your right. What they came up with, among others:
A “BIG” question ended the day. We’d answered two a couple of days ago, and for the 6 remaining questions, we each cast our vote for the question we wanted to answer most. The winner was number 4: What are my values and beliefs? This time my colleague and I got into the group (and happen to end up facing each other for the discussion). The “feeling” I got by gauging the looks on participants’ faces after 15 minutes was that it was a good discussion, although the day was long and people were feeling tired.
Now that the Carlsberg’s history, so am I.
July 30, 11 PM, Kathmandu Guest House
The workshop’s over, and I’m sitting here at the KGH sipping a “Limited Edition” Everest beer (it was limited four years ago when I came here). A bunch of German tourists next to me are being louder than I’d like them to be.

Apart from a horrendously bumpy ride through the city of Bhaktapur, the day has been enjoyable. The participants responsible for this morning’s recap did a wonderful job of getting everyone energized and ready for the day (the photo shows them trying to shoot balls in an “HRE basket”; if they miss, they have to answer a question). We coasted through today’s activities, bringing the day to a close this afternoon by having a group reflection on what we’d learned.
After our heartfelt goodbyes (at least until we meet again in Sri Lanka) I ended the day in what could only be described as ideal: Pratik, a friend from our host organization, invited my colleague Bing and I to his home for tea (which inevitably turned into dinner). We met his family and sat on the floor of his home during a power outage in Kathmandu. Children – some his own, others his nephews and nieces – bounced around us and eagerly practised their English as we took copious photos. It was a pleasure to walk the streets of Kathmandu to his home and to meet his mother, his wife, and the assortment of children only too happy to be frightened by me.
Everyone’s now left the restaurant, the lights are turned off, and the amount of time left for me to access the Internet is dwindling. I end this workshop alone in my thoughts, content with what’s taken place, aware that there is always room for improvement in what I do as a facilitator, and convinced even more than before that the work human rights educators undertake is indispensable.
To all of the participants of the South Asia training of trainers, I wish you safe journeys, and may your actions to protect and promote human rights be filled with the passion and conviction you so ably demonstrated over the last few days.
Good night. 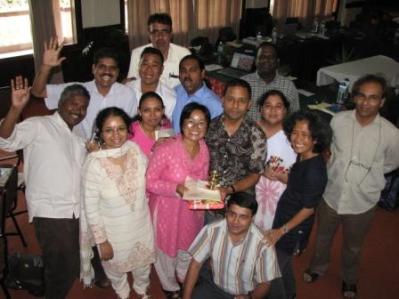