In front of a crowd of human rights educators a number of years ago, I yelled out a tirade of some things that bugged me about human rights abuses and violations. The one statement that got the biggest roar of approval from the audience was “I’m tired of women being treated as second-class citizens around the world.” The idea for the phrase came from an unlikely place. At a train station in northern Tanzania a few years ago, I walked along the platform with some friends and we passed by the women’s toilet with the sign “First and Second Class Ladies Only” written above the door.
There isn’t much reason to believe that women are any better off than a few years ago. Granted, there are more girls worldwide going to school (but less in some places), some countries have improved access to health services for women (but others not), some countries have ensured (in theory if not in practice) greater pay equity between men and women (but there is a still a huge gap), and women’s political participation has increased globally in recent years, but it is nowhere near that of men.
While equality for women is moving at a glacial pace globally, it’s days like today – Mother’s Day in North America – that should give us pause not only to appreciate our mothers but to strongly assert, respect and promote women’s rights.  If anyone ever needs a reason to justify equality for women, I ask you to take a moment and think of the sacrifices your mother made for you. 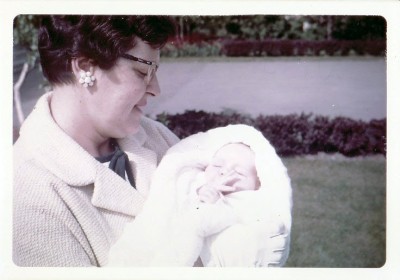 My mother passed away over two years ago, and the time leading up to her death was the most painful experience of my life. Widowed when my brother and I were three and six years old, she constantly reminded us as we were growing up that she was both a mother and a father to us. Caring and overprotective, always worrying and firm with her rules, gentle with an indefatigable energy, my mother demonstrated to me the absolute strength, courage, and grace that a mother can yield. Fiercely proud of her boys, she made sure we had the education she and my father never did. She wore the same clothes for over ten years while my brother and I outgrew our new K-Mart shirts and pants at least twice a season. She taught us the importance of traditions, from Friday night “chocolate bar night” to summer trips by the sea. She taught us to take our hats off in a restaurant (but women were allowed to keep theirs on), to get up at the dinner table when a woman stands up, and to “always hold the door for a lady.”
She stayed at home and did not work until I was ten. At that point, with her savings dwindling, she took a job as a receptionist at a trucking company down the road, worked from 5 until 9 PM Monday to Friday. A hot meal was always prepared for my brother and I, and she came home from work and kissed us goodnight. It was not an easy job – the environment was ripe for harassment, but she handled the job with a dignity that only she could pull off. Her next job working in a high school posed a different set of challenges, but she insisted on good manners from students showing up at the reception; anytime they said “What?” she politely reminded them that “Pardon me?” was the only way to talk to her.
Her emotions were often masked, and it was only in later years that she finally let the burden of raising two children on her own finally give way to the joy of spending time with her four grandchildren. She offered to tell her story to anyone who was prepared to listen (and just as often to those who were not). But in recounting the days when she raised my brother and I, even the most trying times were turned into humorous stories that regaled all who listened.
In December 2009, I took her to a bookstore and found her behaviour a little unusual. She sometimes spoke in sentences which made little sense. I didn’t think much of it at the time, but went to her apartment later that evening and knew by the way she was speaking that something was not right. My heart sank at that point and I knew that I’d lost her. She was diagnosed with cancer in the brain, and there was no hope. For the following six weeks, my brother and I spent every day at the hospital with her until she quietly passed away with us at her bedside. In her final weeks she maintained the same dignity and composure facing her imminent death as she did throughout her life: calm, stoic, occasionally stubborn, but never self-pity. As I look back at what she taught me – not only explicitly (“always hold the door for a lady”) but implicitly through her grace, kindness, selflessness, and dignity, I can’t help but try to live my life by living the values she cherished.
For me, this is the best way to honour my mother’s memory, to act with others as she did towards me. I didn’t know it growing up, but she taught me everything I needed to know about human dignity, and for that I am ever so thankful.

5 thoughts on “My Mother’s Memory”