A few people have recently told me how envious they are of the job I have. I get to travel, meet people from around the world, listen to their stories of inspiration about protecting the rights of others. All well and true, however there is a downside to frequent traveling, and I thought I’d step out of the usual “blog voice” of human rights and focus on the travel aspect. (All right, I may mention one or two things about human rights along the way.) For ease of reading, I made a bullet list of the highlights and lowlights of the past 68 hours since leaving my point of departure, Montreal, and arriving at my destination, Jakarta, a full 27 hours late. The bullet points are actually for my benefit because it’s impossible to think straight at this point. 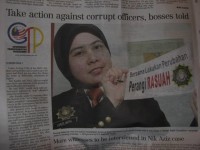 Nothing bad has happened since then. We met some of our participants and I’m excited to start the workshop tomorrow. Despite what some may think, this journey was one of the most amusing I’ve had in a long while, because something different happened. Granted, I could do with more comfort in the airplane seats, but I’ll take a nugget of wisdom from the Dalai Lama. In his book “Becoming Enlightened” which I brought with me (footnote here: this is not the type of book I typically read), he states that we should all “recognize our fortunate situation.” Thanks for reminding me.

One thought on “Travel interludes: Skip human rights for a moment and talk about weird restaurants and colourful airplane seats”